A Speech By Fed Chairman

We were closely watching a speech by Fed Chairman Jerome Powell at the end of last week to see what he’d say about the future path of interest rates and the Fed’s effort to shrink the balance sheet of bonds it purchased as part of its Quantitative Easing program in the aftermath of the 2008 Financial Crisis. Here’s the speech.

So what did we learn? First, the Fed continues to think that unemployment and inflation are about where they want them to be, and the Fed seems undeterred from its plan to raise rates two more times this year. Expect that to happen in September and again in December. Second, we didn’t learn much more about plans on the speed at which the Fed will reduce its balance sheet exposure to bonds and unwind Quantitative Easing.

Stock market investors generally cheered the speech, while the impact in the bond market was minimal.

Stock Market: First, the speech was interpreted as a favorable one for riskier assets, like stocks. The NASDAQ Composite and the S&P 500 both closed at all-time highs on Friday, August 24 and again on Monday, August 27.

Short-Term Bond Yields: There was no meaningful change in short-term yields. Two year Treasury yields closed the day on August 24 at 2.6% and remain in that range.

Long-Term Bond Yields: There was a slight decline in long-term yields as money moved into riskier assets like stocks. Treasury yields closed on August 24 at 2.8%, down from 3.1% in May. They remain around 2.8%.

Bond Yield Curve: In recent weeks, the yield curve has continued to flatten, something we first wrote about earlier this year. The difference between short-term and long-term rates is the lowest it has been in years: as of August 27, the 2 Year Treasury is only 0.2% lower than 10 Year Treasury. Remember — there’s a high correlation between the yield curve flattening and then inverting and the likelihood of a recession. 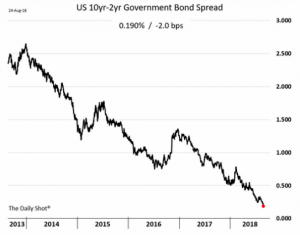 That phenomenon leads us to what is probably the most interesting thing that has started to happen in the market. Based on futures, investors now expect short-term rates to decline in 2020, rather continuing to go up or stay flat. This is consistent with Vanguard’s recent prediction that they expect a recession in 2020. 2020 is also the year when the Fiscal Cliff is set to occur. This Bloomberg article summarizes how the tax cuts signed into law last year are providing a short-term stimulus, which will last through next year, but by 2020, that stimulus will have largely warn off and the nonpartisan Congressional Budget Office fears that this will result in slow growth, or even the economy shrinking. 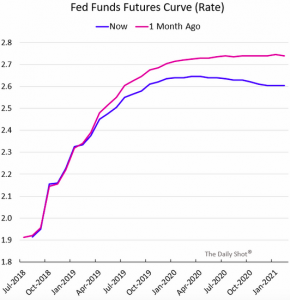 If 2020 starts to become conventional wisdom for the next recession, expect some real pain to be felt in 2019, or even 2018. When most investors agree about what bad thing will happen and when it will happen, you start to see some try to sneak out of the party early. And when that happens, we could be in for a mass exodus even if economic indicators aren’t showing much stress at all. And then the market turmoil can create a feedback look into the real economy.

What does this mean for a possible annuity purchase?

In short, none of the developments in the bond market that have played out in July and August have really shown up yet in annuity pricing. Since these factors are all putting downward pressure on yields, this is means that there’s a relatively large risk that at least some insurers reduce payout rates in the coming days and weeks. That’s what makes now a good time to buy if you’re considering a purchase in the next couple years.

How can I purchase an annuity?

At Blueprint Income, we offer annuities from more than 15 top rated insurance companies. Click below to get real-time personalized quotes.

From there, you’ll get access to our annuity guides and team of specialists to help you analyze your retirement finances and walk you through the application process.

Impact of the Fed’s Interest Rate Increase on Annuity Rates

Bonds and income annuities have unique features that make them important components of your retirement portfolio. Understanding the role each plays in preparing for retirement can help you optimize the conservative, or safe, portion of your portfolio.

A flattening yield curve (one where the difference between short-term and long-term Treasury yields is smaller than usual) suggests two annuity buying strategies. Either buy a fixed rate annuity now, and wait for rates to rise before buying an income annuity. Or, start buying income now but do so in small pieces over time.