The Fed sent a strong signal last week that rates were less likely than previously thought to move up in the near-term. After the Fed’s meeting, Wall Street thought there was now only about a 10% chance of any rate increases this year. This caused 10 Year Treasury yields to decline and the stock market to rally. Here’s reporting from New York Times, Wall Street Journal and CNBC on the news.

Most insurers reduced rates on their fixed annuity and (immediate and deferred) income annuity products in January and early February to reflect declining bond yields in November, December and the early part of January. The highest products were relatively stable, despite many insurers dropping rates. 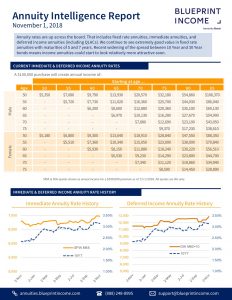 As we suspected, annuity rates have mostly moved in one direction in January and early February — down. The yield declines in the fixed income (especially Treasury) markets in November, December and early January have now, in our estimation, mostly been factored in. Treasury bond yields have been range bound for the last three weeks.

The market performing poorly reminds us that we need to be cautious with the risks we take so we navigate market crashes well. Defend against recency bias by having a financial portfolio that will do what you need it to do through all kinds of market cycles.

If one's goal is to avoid running out of money in retirement while leaving the largest possible legacy behind at death, then income annuities play a crucial role. In Blueprint Income's recent white paper, we demonstrate that portfolios made up of just stocks and annuities produce the best outcomes.

Bonds and income annuities have unique features that make them important components of your retirement portfolio. Understanding the role each plays in preparing for retirement can help you optimize the conservative, or safe, portion of your portfolio.