Annuity rates have held steady this month. After several consecutive months of Treasury Bond declines, things leveled off in April. Yields on April 1st were 2.49% and closed at 2.52% on May 1st, so they were effectively flat on the month.

The real question: Where will rates go from here? On the one hand, the President has been trying to strong arm the Fed into cutting rates by 1%, which would be a massive cut. This would hurt annuity payout levels. Until recently, the Fed expected to increase rates in 2019 and into 2020, but now has backed away from that stance, saying that it expects to hold rates steady for the foreseeable future. Wage growth is close to 3%, the stock market has recently been hitting all-time highs again, and most other economic indicators are generally positive. In that environment, it’s hard to make the case for rate cuts. Given these countervailing forces, the most likely scenario is the Fed doesn’t touch rates this year and waits for some kind of shift in the economy.

Most insurers held their immediate annuity, longevity annuity and fixed annuity rates constant last month, but there were a handful of insurers that dropped rates. Click to download May 2019’s Annuity Intelligence Report. 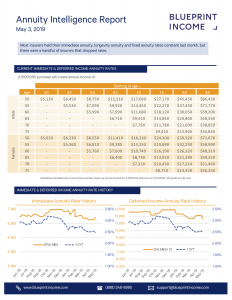 Do Fixed Indexed Annuities Make Sense If You Want to Maximize Guaranteed Income?

We’ve always taken the stance that the simplest annuities with the purest guarantees make the most sense inside your well-diversified retirement portfolio. But in recent months, we’ve taken notice of some in the industry saying that it’s possible in some instances that indexed annuities, when bought at a certain age and deferred for a certain period, might provide a higher monthly income than an income annuity. So we did the analysis. And we found on some occasions, that can actually be true. Read more here.

Have a question? Please give us a call or email us at [email protected] We’d love to help!