On October 30, the Fed cut rates, continuing the downward pattern in short-term interest rates that began earlier this year. At the same time, most insurers raised annuity rates slightly this month. What gives?

In short, the Fed has an outsized impact on the short-term Treasury yields, but not long-term ones, through its rate-setting capacity (Note: It can influence long-term interest rates through quantitative easing, but that’s a discussion best left for another day).

Take a look at the three-month trend in the difference between the Fed’s benchmark rate and the 10 Year Treasury and you can see how the relationship has flipped. Since July, the Fed Funds Effective Rate was higher than the 10 Year Treasury, but now it’s lower. 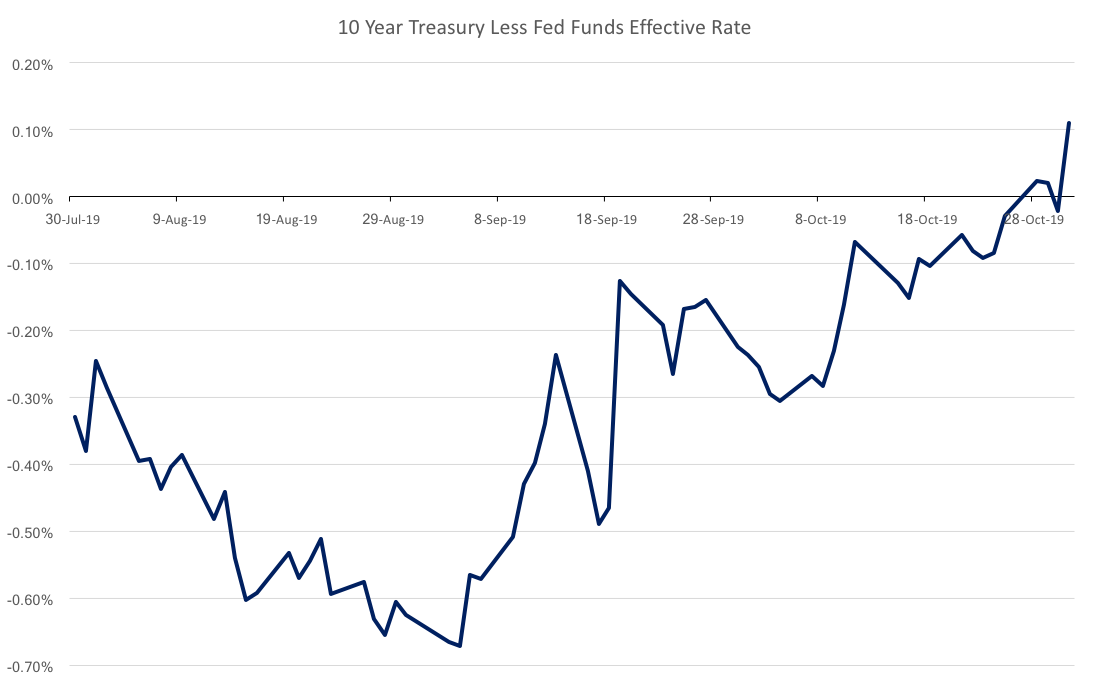 Why are yields on the 10 year Treasury increasing? It’s complicated, but most market participants believe it to be some mix of (1) optimism about a China trade war truce; (2) slightly improving economic data; and (3) changing expectations about future central bank policy.

So the Fed cutting rates at the same time medium and long-term yields are rising has caused the yield curve to resume its “normal” shape – upward sloping (but only slightly). All that talk about the inverted yield curve has subsided for now. And as everyone was saying a few months ago, the inverted yield curve portends recession. So does the fact that it’s no longer upward sloping mean we’re in the clear? No is the short answer. Mohamed El-Erian in a Bloomberg op-ed recently wrote a good piece about why here.

If all this seems quite technical, just remember these three things:

It continues to be a wild ride in the financial markets. You’d think that trade war fears and some soft recent macroeconomic data would push markets lower. But that’s not what has happened at all. The stock market had its best first half of the year in recent memory. And bond prices have risen to &hellip; <a href="https://www.blueprintincome.com/resources/annuity-trends/november-market-update-fed-cuts-rates-again-but-annuity-yields-on-the-rise/">Continued</a>