What’s Next For Annuity Rates?

What's happening in the market in July 2019.

It continues to be a wild ride in the financial markets. You’d think that trade war fears and some soft recent macroeconomic data would push markets lower. But that’s not what has happened at all. The stock market had its best first half of the year in recent memory. And bond prices have risen to such a point that 10 Year Treasury yields are now below 2% (bond prices and yields move in opposite directions).

The yield curve has inverted here in the US, which is often a precursor to a recession. And in some countries in Europe, the entire yield curve is close to going negative — meaning that you may have to actually pay for the privilege of parking money. In normal times, the opposite is true — central banks pay those who lend to them.

What’s the Fed Up to?

What a difference a year makes. The Fed raised its target interest rate by 0.25% every quarter last year. So far this year? It hasn’t raised rates at all.

The market now believes the Fed will cut short-term interest rates by more than 0.50% before the end of 2019, a significant shift from the beginning of the year (when most assumed rates would hold steady) and mid-last year (when market participants assumed the Fed would continue hiking rates in 2020).

The Fed cutting rates by 0.25% at their July meeting seems to be the most likely outcome at the moment, but no rate cut or a 0.50% cut still seem possibile. A rate cut next month would be the first rate cut since 2008. And that might only be the beginning. Check out this chart from Goldman Sachs. 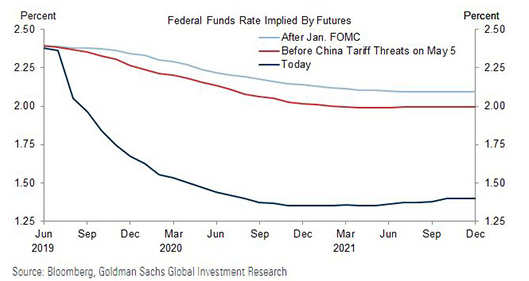 That bottom line is where things stand as of last week. Financial markets now expect the Fed Funds Rate to drop about 100 basis points (1%) before the end of next year. At the beginning of the year (right after the January Federal Reserve’s Open Markets Committee meeting), the markets only expected a slight drop from where we are today.

What’s changed so much? The trade war has ratcheted up over the course of the year, with tariffs of up to 25% now being imposed on certain Chinese imports. And the jobs report has missed expectations several times this year, with the worst of the year coming at the beginning of this month. President Trump has continually upped his rhetoric about the Fed’s need to cut rates.

All else equal, lower bond yields mean lower annuity rates and we saw many (but not all) providers cut annuity rates again yesterday on the heels of several previous cuts.

What’s a Retiree to Do?

Annuity rates are lower, but so are bond yields. Generally speaking, fixed income and annuity markets move together directionally, and this period we’re in is no different. If you’re considering an annuity, the same paradigm as always applies — unless you have a burning need to buy a large annuity now, it usually makes sense to start smaller and buy over time across market cycles. Annuity payout rates have come down from where they were late last year, but that doesn’t necessarily mean now is a bad time to buy. Call us, email us or visit https://www.blueprintincome.com/income-annuities-quotes to start an income annuity quote.

What’s Happening in the Market in June 2019

The market now predicts a 68% chance that rates will be cut in July, up from a 20% chance just a week ago.

Annuity rates have held steady this month. After several consecutive months of Treasury Bond declines, things leveled off in April.