Topics
Annuities provide guaranteed income in retirement backed by insurance companies.
Monthly commentary on trends in income and fixed annuity rates.
What's happening inside Blueprint Income? What we believe and how we approach retirement.
Retirement! Years of doing what you want await! Prepare as much and as early as you can to make the most of it.
You need a source of income to sustain your retirement. Here's how you can make that income lifelong and guaranteed.
Resources — Other Annuities

How do you compare a fixed indexed annuity to other options available? The best way is to look at an example that compares these options over a historical period.

To start off, let’s talk about two of the options available if you want a retirement portfolio that includes both a lifelong source of income and has money invested in the market:

For this analysis, Option 1 will be based on the Voya Quest 7 with the Voya myIncome Withdrawal Benefit (Guaranteed Income Rider) with rates as of 2/2/2017. Option 2 uses the Mutual of Omaha Deferred Income Protector with Cash Refund with rates as of 2/2/2017, along with the Vanguard 500 Funds which tracks the S&P 500 and charges a 0.05% annual fee. For both scenarios, the first 15 years will be based on historical S&P 500 performance between 2002-2016, after which a conservative assumption of 4% growth is used.

To compare these two options, let’s use Adam as an example. Adam, 45-years-old, is considering investing $100,000 in a fixed indexed annuity. His goals are to (1) create a guaranteed income stream starting at age 60, and (2) grow his funds by participating in the market.

Option 1: Buy a $100,000 fixed indexed annuity with a guaranteed lifetime income rider starting at age 60. This rider will produce an income benefit of $7,000 per year.

Option 2: Spend $75,000 to buy a longevity annuity that produces an identical income stream, and leave the rest of his money in the market.

So how did each of these strategies do over time?

First, let’s compare the income benefit available. The guaranteed income generated by each of these two strategies is exactly the same: $7,000 per year starting at age 60 and continuing for as long as he’s alive.

For the longevity annuity in Option 2, there is absolutely nothing he can do to risk or lose this benefit. But, for the fixed indexed annuity in Option 1, any withdrawals made above the allowable amount will substantially reduce the guaranteed income benefit and cancel the guarantee that it continues for life.

For the fixed indexed annuity in Option 1, there is also an opportunity for the income benefit to increase if the accumulation value grows to be greater than the guaranteed withdrawal base. If this is the case on a policy anniversary, the guaranteed withdrawal base would “ratchet” up to meet the accumulation value. This would also mean a higher income benefit. This is extremely unlikely to happen.

Next, let’s look at the growth of the assets. For Option 1, this is the same $100,000 that’s invested in the fixed indexed annuity, which is supposed to provide access to market upside and produce a guaranteed income stream. For Option 2, this is the $25,000 leftover from the longevity annuity purchase that can be invested directly in the market.

The following chart shows the annual return for the funds invested from ages 45 to 60, using historical S&P performance from 2002 to 2016. 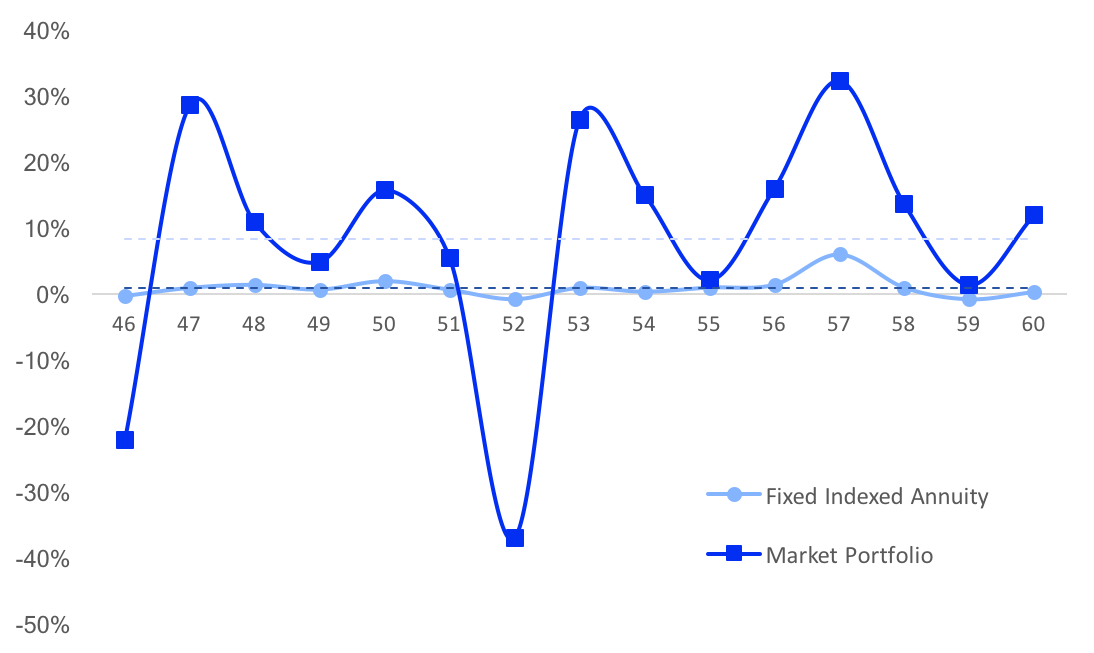 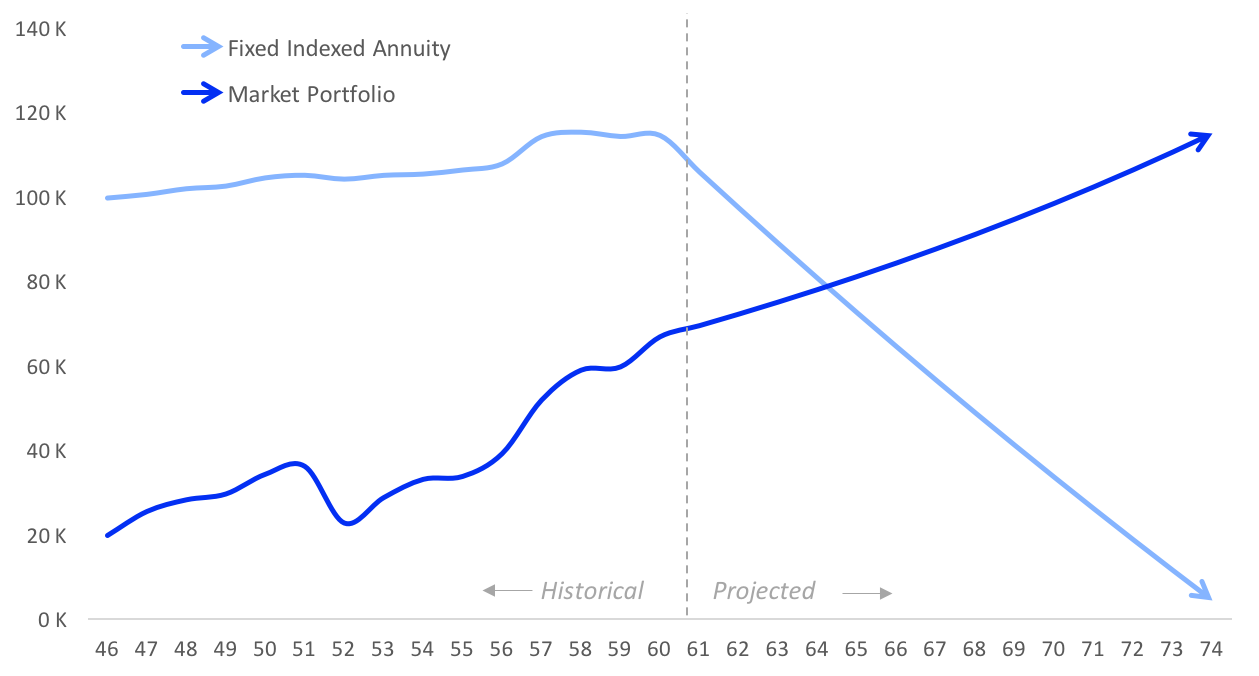 The market portfolio more than doubled in the first 15 years, benefiting fully from the index’s growth (offset only by a minimal 0.05% investment fee). In comparison, the fixed indexed annuity accumulation value, which was invested in the same underlying index, experienced growth of only 14% after applying the participation rates, caps, spreads, and fees.

The market portfolio continues to grow indefinitely, whereas the fixed indexed annuity accumulation value begins to decline once income benefits begin at age 60. From that point forward, there’s no potential for growth. Instead, there will just be charges against the account for each withdrawal and for rider fees. In this example, all of the fixed indexed annuity accumulation value is depleted by age 75.

So what’s the right approach?

In every category above, Option 1 underperforms Option 2, that is the fixed indexed annuity provides an inferior outcome to using an income annuity and a market based portfolio.

In fact, no matter what the goal, fixed indexed annuities are typically an inferior solution.

In trying to cover three objectives into one product, the Fixed Indexed Annuity winds up being costly, complicated and suboptimal.

4 Reasons Not to Buy a Fixed Indexed Annuity

Fixed Indexed Annuities aren’t all they appear to be. We’ve laid out the four reasons why you shouldn’t purchase one.

Utilizing asset-based tools to save for retirement is a great supplement to income annuities. Find out the four ways you can accumulate additional assets.

Retire Easy with a Private Pension

You can retire easy and secure with a private pension (Personal Pension) because our Personal Pension is backed by a highly-rated insurance company that guarantees for every dollar you contribute, you will receive a certain amount of income every month starting when you retire.